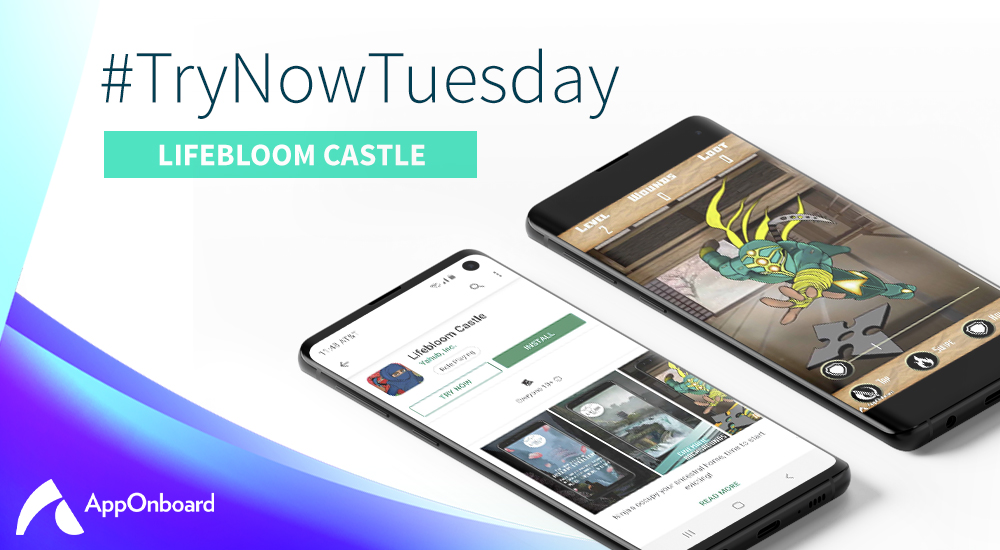 Each “Try Now” edition highlights a new Instant App built for a top developer. Catch up on the rest here.

Indie developer, Yahub, has long partnered with AppOnboard to create playable ads that the developer could use when promoting its suite of casual games, such as Down from the Rock. However, when the Yahub team got their hands on AppOnboard Studio, it had even loftier goals with the no-code software: the developer strived to make a full game that could be launched on the Google Play Store.

The result was Lifebloom Castle, a roleplaying game that was recently released on the Google Play Store. In the game, users play as a warrior trying to save a castle that has been overtaken by a group of ninjas and assassins. Overall, the game features a cinematic-feel when it comes to the backgrounds and characters.

By using AppOnboard Studio, Yahub was able to create Lifebloom Castle and add the following gameplay elements without writing a single line of code:

Once finished with its game, Yahub uploaded its AppOnboard Studio creation to the Google Play Store as a game. It even used the “Quick” version of the game as its Google Play Instant app, enabling a “Try Now” button on its Google Play page so users could try the game before installing.

Check out a sneak peek of Lifebloom Castle below:

A new vehicle for prototyping and greenlighting games

Since launching Lifebloom Castle, Yahub has used AppOnboard Studio to create Try Now experiences for two games that were launched on the Google Play Store for Pre-Registration: Light’s Champion and RPS 2019.

By using AppOnboard Studio, the developer was able to make an interactive experience for each game concept, launch each on the Google Play Store, and begin gathering pre-registrations from users. The developer plans to leverage this user feedback (number of pre-registrations) to choose which games to invest in and pursue.

Check out Yahub’s suite of games on the Google Play Store by clicking here.

If you are interested in creating your first experience with AppOnboard Studio, download it for free now.

We are also very excited about our acquisition of Buildbox, the global leader in no-code mobile game development. Buildbox’s suite of tools has been used to create and power more than 45,000 unique games in 2018 alone and has driven over 3 billion estimated downloads in the app stores to-date. Its no-code software will also give developers new ways to create full games. Read the full blog post about the acquisition by clicking here.

Try This Week’s Instant App For Yourself:

If you are viewing this on your Android device, TAP HERE to check out the “Try Now” experience yourself on the Google Play Store! Make sure you have opted-in to Instant Apps in your Google settings.

Please Note: If you are using Samsung Browser or Firefox, you may need to go to the Google Play Store directly to access the “Try Now” button.