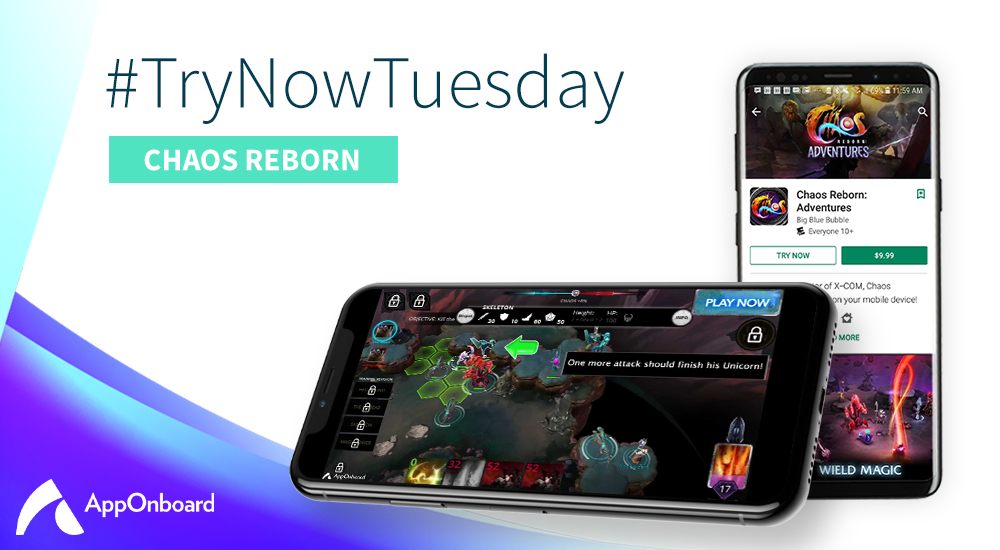 Each “Try Now” edition highlights a new instant app built for a top developer. Catch up on the rest here.

Since 2004, mobile gaming company, Big Blue Bubble, has developed more than 100 video game titles. You probably have played or at least seen some of them, including hits Burn the Rope and My Singing Monsters (the former generated over a million downloads within 24 hours of launching on iPhone alone!).

Having just celebrated their 15th year Big Blue Bubble maintains a proven track record of being the first to market with a variety of innovations in technology and game design, cementing the company as a long-standing industry veteran.

The company is committed to producing fun and engaging content for users and has continued expanding into other genres, especially with recent titles Chaos Reborn (Strategy RPG), Super Dinosaur (Action), and Concert Kings (Music).

Chaos Reborn specifically has had a notable journey to mobile platforms. The turn-based RPG game started out as a Kickstarter project in 2014, led by X-COM’s original creator, Julian Gollop. After being successfully funded, it was then released to Steam in 2015. After a couple years of mobile development and partnering with Big Blue Bubble, Chaos Reborn: Adventures was released on mobile for the first time last September for $9.99 and received much recognition.

Immediately out the gate, Chaos Reborn: Adventures was given a 9/10 by PocketGamer. In the words of deputy editor of Pocket Gamer, Harry Slater: “This is without a doubt the best turn-based strategy game you can get for your phone or tablet.”

When Big Blue Bubble discovered that the Google Play Instant program allows players to try an app or game before committing to the full install/purchase, the company decided to use AppOnboard Studio. AppOnboard Studio allows users to create app experiences quickly and effectively without needing to know how to code.

“As an avid mobile gamer myself, Google Play’s ‘Try Now’ button has changed the way I myself discover premium games and decide which ones I actually want to pay for. Buyers remorse is a thing of the past,” said Nate Dykstra, Sr Director, Business Development, at AppOnboard. “AppOnboard Studio is allowing all developers to easily make this a part of their Google Play Store page just as Big Blue Bubble did with Chaos Reborn to great success.”

Check out the Chaos Reborn: Adventures instant app below:

More About the User Experience:

The Chaos Reborn instant app is averaging nearly a 30% Tap to Install rate, meaning that almost 3 out of 10 users are tapping to pay and install the game!

“Given our commitment to innovation and accessibility, leveraging the Google Play Instant App feature was an easy decision,” said Bryan Davis, SVP Business Development at Big Blue Bubble. “Working with AppOnboard” Davis continued, “made the process simple, we look forward to using the Instant App feature on more titles in the future.”

Try This Week’s App Store Demo For Yourself: